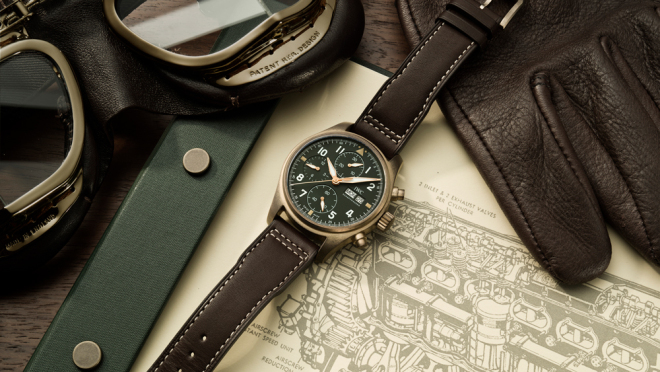 The brand is rolling out new Spitfire and Top Gun lines and a high-complication for its Le Petit Prince timepiece.

A full fleet of new pilot’s watches at IWC will be ready to fly off shelves by next year. The Swiss watchmaker just unveiled updates to its Spitfire and Top Gun lines and has a new version of its Le Petit Prince timepiece, which is the first of its pilot’s watches to feature a constant-force tourbillon (and the first case made in hard gold). The brand has also announced a several years-long partnership with Goodwood Aviation, a company that provides aircraft maintenance services each year and flies 18,000 flights on the Goodwood Aerodrome (also known as the Chichester/Goodwood Airport built during WWII by the Royal Air Force). 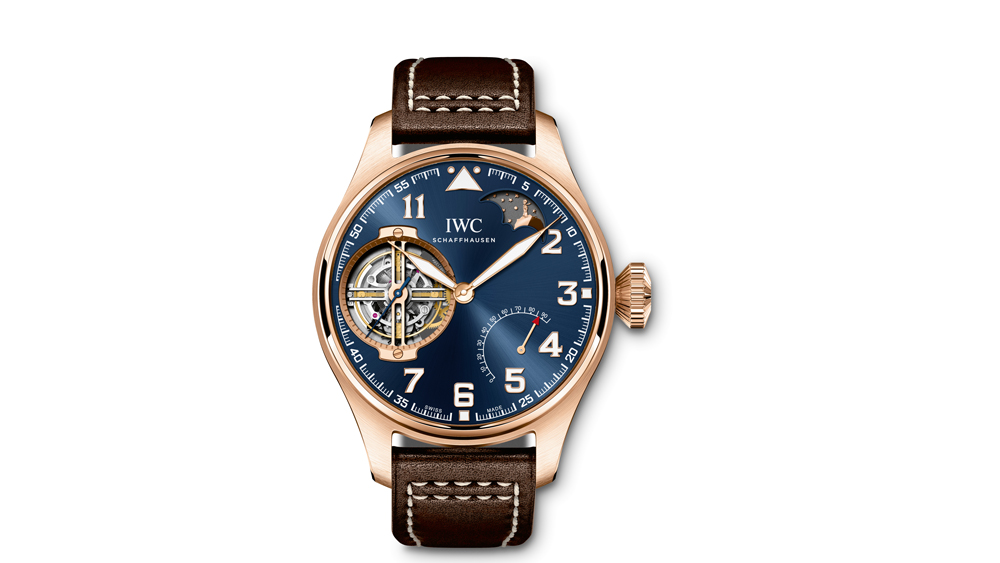 The elite pilot of the new collection is IWC’s Le Petit Prince Big Pilot Watch ($235,000), a continuation of timepiece tributes to French aviator and author Antoine de Saint-Exupéry, which is limited to just 10 pieces. The new timepiece is IWC’s first pilot watch to come with a constant-force tourbillon and is being offered in a hard gold case for the first time. In fact, it is the first time IWC has ever used hard gold, a new version of red gold that is modified in the manufacturing process to be harder and 5 to 10 times more wear-resistant.

The constant-force tourbillon comes with a patent for a technical innovation that separates the escapement from the flow of force from the dial train. Every second it re-tensions a balance spring, which serves as temporary energy storage and then transfers even force pulses to the escapement wheel. What does that mean, you ask? Simply put, it eliminates gravity on the oscillating system, which results in a new level of precision timekeeping ensuring the watch is more accurate.

For collectors of pilot’s watches and IWC fans alike, this will be the premium piece to own—if you can get your hands on one of the 10 models worldwide. 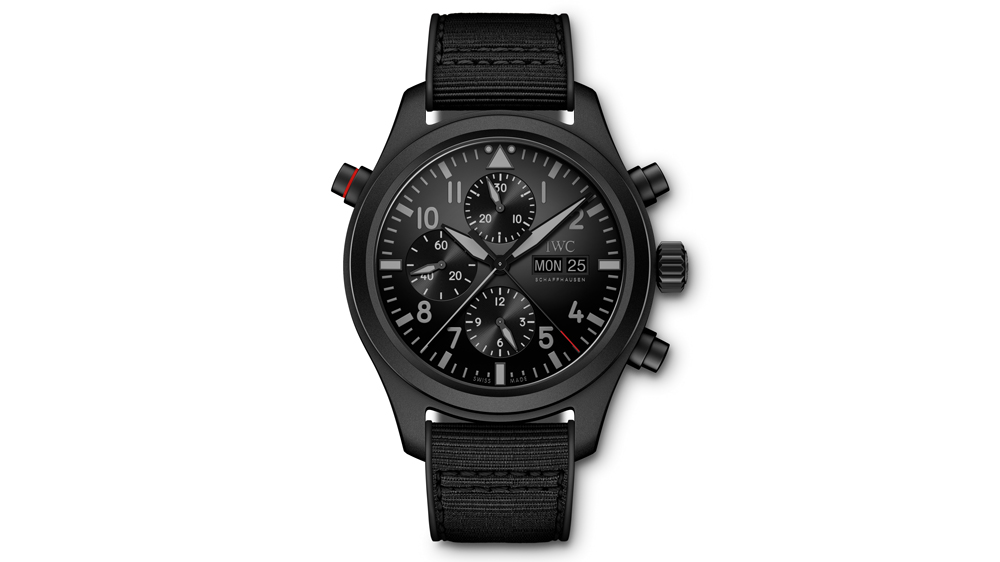 The claim to fame of the new Top Gun watch from IWC ($15,000) is that it also comes in a never-before-used material in the collection—Certatanium. The material combines the technical advantages of titanium and ceramic (known for being durable and lightweight). IWC boasts another patent for the material, which it developed in-house. The material is also said to be corrosion-resistant and its black color makes for a handsome new all-black edition of the Big Pilot Top Gun. It is the first completely black design from the brand that doesn’t involve using a coating—this also includes its push-buttons and pin buckles.

The watch comes with a double chronograph with an integrated split-seconds hand and is powered by the 79230 caliber with 44 hours of power reserve. 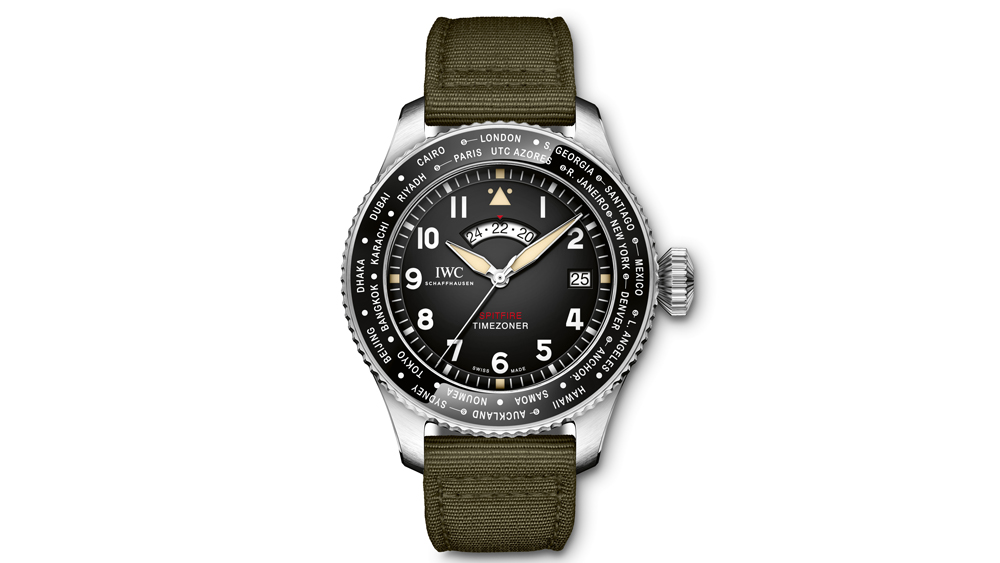 Here’s another first: IWC’s patented Timezoner mechanism has been combined with an entirely new automatic in-house 82760 caliber that has a Pellaton winding system with water-resistant ceramic parts and a power reserve of 60 hours. The Timezoner mechanism, originally launched in 2016, is a function which allows for the setting of two different time zones by a rotation of the bezel with an hour hand, 24-hour display (just under the 12 o’clock marker), and a date that rotate at the same time. The steel encased black dial is relatively clean and combined with the cream lume accents along with the army green textile strap, which imitate the cockpit of a Spitfire, makes for a great style piece on top of its functionality and historical reference.

Limited to just 250 pieces, the 46 mm by 15.2 mm watch ($12,400) is a big tribute to a project aimed at restoring an old Spitfire that will then be flown around the world. Pilots Steve Boultbe Brooks and Matt Jones will be embarking on their “Silver Spitfire-The Longest Flight” project starting this summer with the new IW395501 on their wrists. 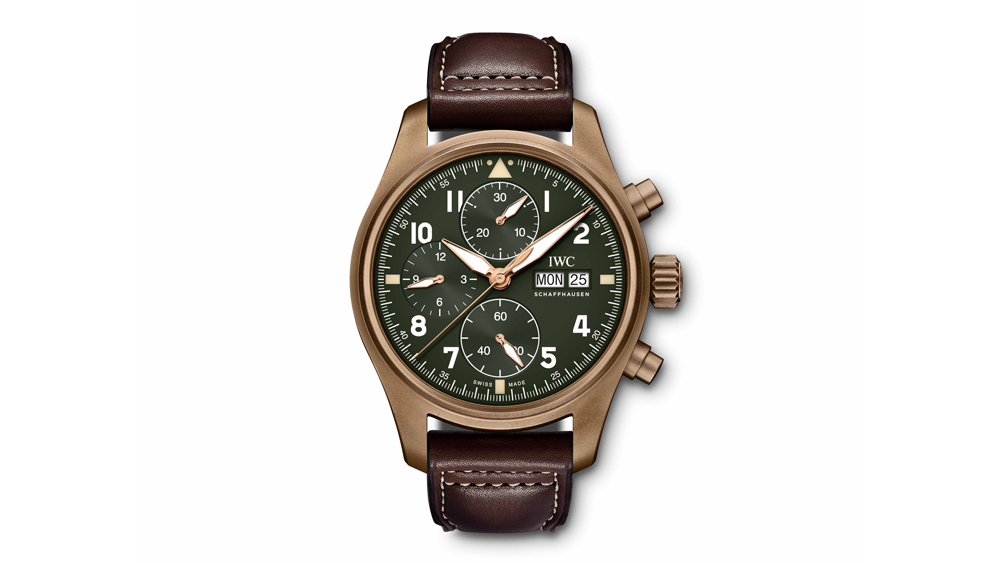 This new 41 mm by 15.3 mm chronograph will be IWC’s bread and butter introduction. Priced at $6,250 and in a smaller size than the other pilot’s watches, it is the most accessible timepiece of the new releases. It is the first time the watch is being offered in a 41 mm size.

But for those who care more about what’s in the guts, this watch is the first Pilot’s Chronograph to use a movement from the 6900 family (which was first introduced in 2016). The in-house 69380 caliber has a classic column wheel design and has two subdials at 9 o’clock and 12 o’clock, along with a date and day display. It has a power reserve of 46 hours.

The ref. IW387902 also got an update to its face, with a bronze case that will develop a rugged patina over time. It’s not a limited-edition, but it’s casing will ensure that each piece will always be unique to its owner.